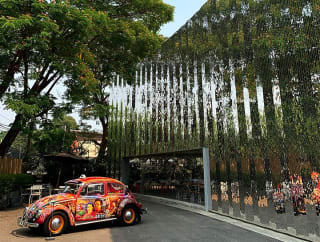 When MAIIAM Contemporary Art Museum opened a few years ago, the creative community around not just Chiang Mai but all of Thailand rejoiced. The space showcases culturally powerful Thai modern art in a sophisticated minimalist house-turned warehouse with a striking reflective exterior 20 minutes outside of downtown Chiang Mai. Inside the two-storey space is a mix of rotating and permanent exhibits from the personal collections of Jean Michel Beurdeley and his late wife Patsri Bunnag together with their son Eric Bunnag Booth, who is also the managing director at Jim Thompson. The collection includes works from some of the country’s most respected contemporary artists like Kamin Lertchaiprasert and the late Montien Boonma. The thought-provoking, innovative works of the 3,000-square-metre museum have helped cement Chiang Mai as an international arts destination. In 2017, MAIIAM became the first museum in Thailand to win the Best New Museum of Asia Pacific Award.